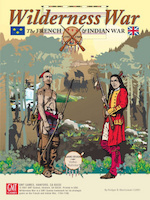 Wilderness War takes two players into the French & Indian War, 1755-1760, the climactic struggle between France and Britain for control of North America. It uses strategy cards and a point-to-point map similar to GMT's award winning For the People and Paths of Glory. Players maneuver and fight over a map stretching from Northern Virginia to Canada. As the leader of French or British forces in North America, you will need to defend your frontier, raid your enemy's frontier, build fortification networks through the harsh wilderness, recruit Indian allies, besiege forts and fortresses, and deal with events occurring in Europe that are above and beyond your control.